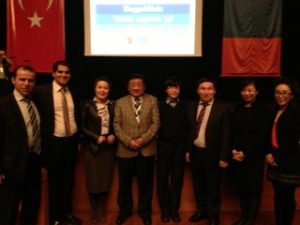 The VI Convention of World Mongolians  was held in the beautiful Turkish city of Bursa between 12th-16th December 2012 under the patronage of the President of Mongolia, H.E. Elbegdorj Tsakhia and the President of Turkey H.E. Abdulah Gul. Many Mongolian, Hun and Turkish origin people, partners and colleagues of Mongolia from all over the world gathered to participate in the convention.

Board members of the Association for the Development of Mongolian Women in Europe (ADMWE) led by Ms Enkhjargal Danzanbaljir Director of the London Office for the Bank of Mongolia, Ms Azjargal Ulzii Head of M&S Regional hub from the European Bank for Reconstruction and Development and Ms Zuljargal Mendbayar Financial Analyst from the City, were a part of the delegation contributing business discussions related to the Mongolian economic and investment environment. They also represented the Mongolian community from London on behalf of the Mongolian Culture centre in the UK.

The Governor of Bursa, H.E Ambassador Ts.Gombosuren on behalf of the joint organizing committee, the President of the WMC, Mr. Cetin Yildirim, Honorary  Consul  of Mongolia  in the   city  of Bursa the local  coordinator from the Turkish  side welcomed all the guests. The convention not only held art and cultural events introducing Mongolian films and fine art but also business meetings and factory site visits. The convention invited well-known politicians, parliamentarians, scholars, and artists such as H.E. First President of Mongolia Ochirbat Punsalmaa, MP Bakei, President of the Academia of Sciences Mr Enkhtuvshin, twice hero Russian Cosmonaut V.A. Lyakhov, famous opera singer Ms Dolgor, and writer Lhagvasuren Bavuu and heads and members of friendship societies from Russia, Kalmyk, Buriad, Austria and Kyrgyz.

Bursa was the capital of the Ottoman Empire between 1326 and 1365. It is the fourth most populous city in Turkey and one of the most industrialized metropolitan centers in the country, making it the perfect city to hold the VI Convention of World Mongolians.

The Convention of World Mongolians is an international Non-Governmental Organization and have previously organized conventions in the capital city of Burytia in 2010 and in Ulaanbaatar and Kharahorum, Mongolia in 2011.  The VI convention opened new vistas for the future development of cooperation among the World Mongols.

Categories: Empowering Women, News
Prev postNext post
Association for the Development of Mongolian Women in Europe is hosting “Building Sustainable Recovery from Covid 19”,  how
Read More
ADMWE board members Gundari Gombosed and Namuun Chuluunbaatar both have successfully accomplished month long “Walk All Over Cancer”
Read More
Happy International Women’s Day 2021!   This year’s International Women’s Day IWD 2021 campaign theme is #ChooseToChallenge A
Read More
https://zoom.us/webinar/register/WN_WwqdulWzRRiykzfXZ4SBXQ or visit www.admwe.org for details on how to join Our first ever International Women’s online conference
Read More
It was amazing to see Namuun who was Young artist of the Year in 2012 from ADMWE’s “Woman
Read More
Read More
Please watch the news from 8:25 seconds to 10:32 seconds from the link below.
Read More
This year’s event organised in Stockholm, Sweden was one of the successful one and we are proud to
Read More
It is to inform you that the submission deadline to receive materials of nominees for the Woman of
Read More
Many organisations and individuals every year support us in a range of ways –some donate us for the
Read More