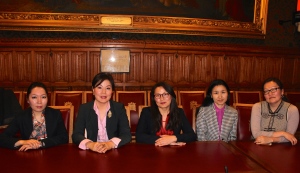 Three years ago, ADMWE first time attended this event where topics including domestic violence, trafficking, highlighting women’s political and economic participation were covered, every year since, ADMWE has joined the global truce campaign against domestic violence to work towards raising awareness on the importance of reducing domestic violence.

At the beginning of this year ADMWE sent a letter of  request to the Mongolian PM Saihanbileg Ch to include an amnesty law for victim’s of domestic violence, women currently serving prison term because they killed their husbands in self defence. So far one mother has received President Elbegdorj Tsahia’s pardon. Even though this is only one number, we can see our campaign has some result.

This year ADMWE has for the first time used this event to make a platform to raise awareness issue revolving Gender-Inequality especially regarding the gender pay gap in Mongolia in  the UK parliament.

Ms Enkhe, President of ADMWE has highlighted Gender pay gap inequality in Mongolia, in her speech “Inequality of genger gap is increasing from time to time and year to year, it showed in statistics in Mongolia, women are paid on average 20% less than the men and women in executive positions are paid 170000 tugrik less than male executive, this shows there is clearly some issues and she strongly urged that Mongolian government needs to pay attention”.

During closing time of the event Odna, CEO highlighted the work we have done on domestic violence.

This year’s International Women’s Day 2015 theme was “Empowering Women – Empowering Humanity: Picture It.” This event addressed the inclusion and equality of Women, protection and education of Girls and encouraging the leadership qualities of young adult females in the modern world.

Imagine a world where a female, no matter her age, can participate in politics, receive an education, have her own income, and dress and speak with no fear of discrimination or violence.

Imagine a world of equality and acceptance. The greatest achievements, accomplishments, studies, movements, amongst others all began with the start of an idea. It was the dedication and free will of the individual or groups to spread their ideas that make it into reality. They made it happen.

Overall, the event was such an inspirational for many of us and it gave us time to share views of gender equality and women’s right, women of all backgrounds and ages and young speakers  gave their opinion on empowering women.

Categories: Empowering Women, News
Prev postNext post
Happy International Women’s Day 2021!   This year’s International Women’s Day IWD 2021 campaign theme is #ChooseToChallenge A
Read More
https://zoom.us/webinar/register/WN_WwqdulWzRRiykzfXZ4SBXQ or visit www.admwe.org for details on how to join Our first ever International Women’s online conference
Read More
It was amazing to see Namuun who was Young artist of the Year in 2012 from ADMWE’s “Woman
Read More
Read More
Please watch the news from 8:25 seconds to 10:32 seconds from the link below.
Read More
This year’s event organised in Stockholm, Sweden was one of the successful one and we are proud to
Read More
It is to inform you that the submission deadline to receive materials of nominees for the Woman of
Read More
Many organisations and individuals every year support us in a range of ways –some donate us for the
Read More
We are pleased to introduce nominees who have been nominated this year “Woman of the Year – 2019”
Read More
Please find our provisional agendas for Women of the Year 2019 Event that is compromised of following three
Read More