10 March 2014 – ADMWE participates in the 58th session of the Commission on the Status of Women at UN Headquarters’ in New York.

Home › Projects › Empowering Women › 10 March 2014 – ADMWE participates in the 58th session of the Commission on the Status of Women at UN Headquarters’ in New York. 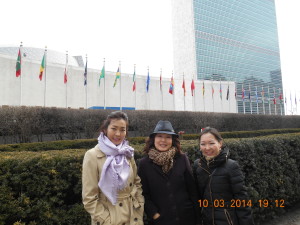 Ms Enkhjargal Danzanbaljir President of ADMWE is representing Association of Development of the Mongolian Women in Europe  in the 2014 session of the Commission on the Status of Women (CSW). This year’s session will focus on development and education.

More than 6,000 registered representatives of the 193 Member States, UN and non-governmental organizations (NGOs) will discuss the challenges and achievements in the implementation of the eight anti-poverty targets known as the Millennium Development Goals (MDGs) ahead of the 2015 deadline. The final discussion document will contribute to shaping a future development agenda, with some participants pushing for a standalone goal on women’s empowerment in the post-2015 development agenda. 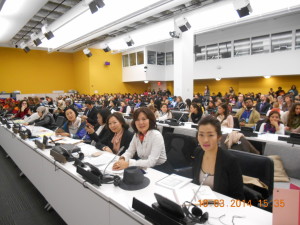 Women, held in Beijing in 1995. The Beijing Declaration and the Platform for Action, adopted unanimously by 189 countries at the conference, is considered the key global policy document on gender equality, addressing critical areas such as women and poverty, violence against women and the human rights of women.

The CSW is due to conclude on 21 March. Until then, more than 135 events organized by UN agencies will be held at Headquarters, alongside the official meetings of the Commission. According to UN Women, an additional 300 parallel events will be hosted by the NGO community close to the UN premises.

Categories: Empowering Women, News
Prev postNext post
Association for the Development of Mongolian Women in Europe is hosting “Building Sustainable Recovery from Covid 19”,  how
Read More
ADMWE board members Gundari Gombosed and Namuun Chuluunbaatar both have successfully accomplished month long “Walk All Over Cancer”
Read More
Happy International Women’s Day 2021!   This year’s International Women’s Day IWD 2021 campaign theme is #ChooseToChallenge A
Read More
https://zoom.us/webinar/register/WN_WwqdulWzRRiykzfXZ4SBXQ or visit www.admwe.org for details on how to join Our first ever International Women’s online conference
Read More
It was amazing to see Namuun who was Young artist of the Year in 2012 from ADMWE’s “Woman
Read More
Read More
Please watch the news from 8:25 seconds to 10:32 seconds from the link below.
Read More
This year’s event organised in Stockholm, Sweden was one of the successful one and we are proud to
Read More
It is to inform you that the submission deadline to receive materials of nominees for the Woman of
Read More
Many organisations and individuals every year support us in a range of ways –some donate us for the
Read More